As I stepped onto the deck with my pack on my back, the mood was somber, but determined. It was a beautiful clear day. The light filtering through the trees energized me. When everyone had arrived, Rosin stood.

“I know you are all wondering how you are going to find your wildlings,” she said. “Close your eyes for a moment.”

I started to glimpse a vision of my wildling, just like I had been seeing for weeks now. But instead of running through thickets or mountain ridges, my wildling was sitting still, gazing intently into my eyes as if waiting patiently for me. My vision zoomed out, and I realized it’s not just my wildling sitting there; there was a whole gathering of wildlings, mirroring the gathering on the deck. They were together on a grassy plain I recognized as one I had passed on the way to find Mel.

Rosin continued. “Your wildlings are waiting for you. Once you find them, you’re going to have to give them your complete trust as they lead you into the land that is yours to explore and create together. You are ready for this. It’s time to go.”

People started to put on their packs, looking around as if waiting for someone to go first. I was the closest to the stairs leading from the deck, so I started to descend. On second thought, I turned to face the group. “I think I know where our wildlings are. It’s not that far, maybe a two-hour walk.”

Taylor chimed in, “Yeah, I saw it, too.” Taylor started moving toward the stairs behind me. Others followed suit, and soon we were on our way.

Last time we went this way to find Mel, I was so worried I barely had time to look at the surroundings. Today, the woods were particularly breathtaking. Our group was full of friendly but slightly subdued energy, everyone determined not to waste the lessons they’ve learned.

A few hours later, I looked ahead and saw our wildlings sitting there, in the same place and in the same positions we saw them in my mind earlier. It was a little eerie, seeing them so still, gazing intently at each of us.

As we approached, I felt a ripple of energy in the air. Suddenly, our wildlings took off in all different directions, splitting up our large group into smaller clusters.

Our wildlings weren’t running at full speed, but fast enough for us to need to start jogging to keep them in sight. I’m not really a runner, so I was grateful for the steady pace. It’s still jarring to jog with a pack on your back, but it’s manageable. After about 10 minutes, I started to flag. A few of my fellow travelers were barely breaking a sweat, but most of us were pretty tired. 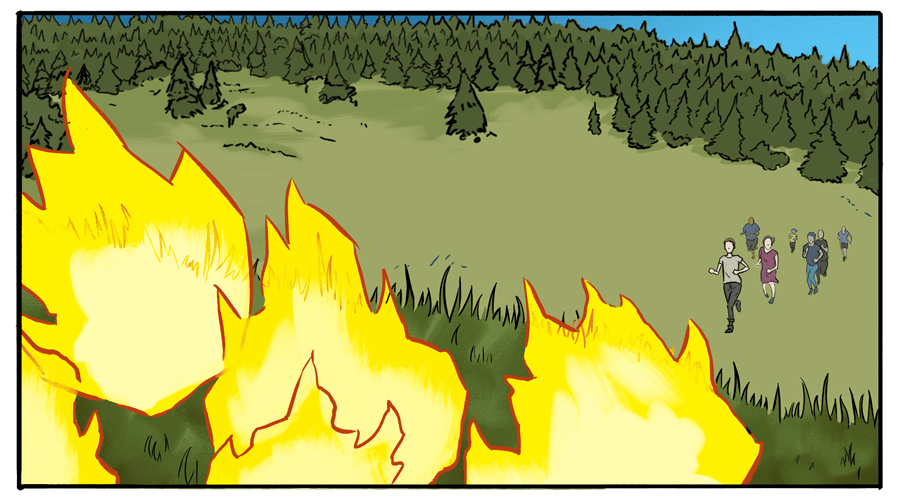 Luckily, they slowed their pace. The wildlings came to a halt in the middle of a grove of pine trees. It looked like a desolate place; nothing like the vision in the fire.

Then I heard a haunting yet mesmerizing song coming from nowhere in particular. Wait, what?

The wildlings brought us to a needwell! Panic gripped my stomach and starts to climb into my throat.

The wildlings walked up to the needwell and turned, gazing at each of us with looks of deep understanding. When my wildling looked at me, I heard a voice as clearly as if it were audible.

“The only way out is through.”

I looked around, and I could tell the rest of your group was having the same experience—that feeling of deep understanding, accompanied by horror. After all we had gone through, to have come this far, to have witnessed Mel destroyed by the needwell’s insatiable need; and now, my wildling is prompting me to step into the needwell myself?!

But then Rosin’s voice echoed through my mind. “Once you find your wildlings, you’re going to have to give them your complete trust as they lead you into the land that is yours…” Is this what she meant?

I looked at my wildling again. I realized I did trust it. Even though everything in me was terrified and repulsed by my memories of the needwell, I knew this was the path I must take. I was ready to follow my wildling at all costs, even without knowing what’s on the other side.

I walked up alongside my wildling. Taylor followed behind and joined theirs. The four of us approached the needwell cautiously as the music swelled, completely absorbing us in the moment. I hesitated for a moment, and then looked at Taylor. I held out my hand to grab theirs. Then, looking deep into my wildling’s eyes, I nodded subtly. Both wildlings leapt into the needwell, disappearing in a moment. Taylor and I looked at each other, then jumped feet-first.

I never landed. Instead, I was standing firmly on a solid wooden platform.

But—how? Why? It was the same old stage, sure enough, but it was somehow… different?

As I watched, the world rippled in front of me. An empty but beautiful valley unfolded before us—fertile land spreading out and forming, trees and grass sprouting and growing. I looked ahead, and the giant sequoia tree I had imagined in the vision began to majestically rise up out of the ground. 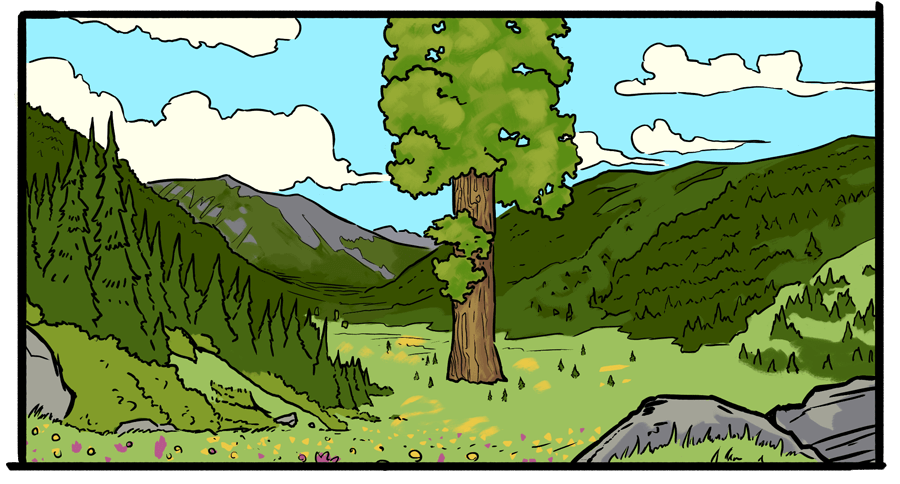 “What is this place?” Taylor asked in disbelief.

I smiled because I knew.