There once was a person named Mel.

In the beginning of time, the universe gave a gift to Mel. “But know this,” they were cautioned. “It is a beautiful and yet dangerous thing.”

If they opened their hands to look at it, the results would be uncertain. It could mean death! Or life beyond dreaming. But either way, their existence could not continue as before. Each day, Mel held tightly to their gift. One particularly daring day gone past, they were on the verge of looking, but the stakes were so high. No. It was impossible.

One day, another person appeared holding a gift they could not bring themselves to open. The two met. Recognizing themselves in each other, they spoke until there were no words left. When all the words ran out, they stood in silence.

The silence grew until it filled the earth. It pressed down and down until the two could no longer stand. Instinctively, the other person unclasped a hand to catch themselves.

From a tiny light in the palm of their grip, a shock of fire lit the world. The other person held tighter and tighter, waiting for the pain to stop, not wanting to lose the sudden astonishing beauty of their only gift. The tighter they held, the more the fire spread, until it consumed its host and the person was eaten by darkness.

Mel was again alone, now with a terrible knowledge and an even more terrible longing for kinship. That moment of revelation echoed in the silence, their mind never more full of curious fascination, their hands never more tightly clutched in fear.

Standing in the wings of the stage and watching, I, too, was gripped by fear. But my heart hurt for Mel and I shared their feeling of intense loneliness, so I scraped together enough courage and chose to walk onto the stage, holding my beautiful and dangerous gift.

“Hi,” I said, introducing myself with a nod and a smile.

Mel looked up and smiled back through teary brown eyes.

There’s a particularly hard-to-describe feeling that emerges when two people meet who quickly sense on a bone-deep level that they’ll be friends as long as the fates allow. It’s not as intense or simple or chemically-inspired as romantic infatuation. It’s more like a moment when the gravity of life’s pain is compressed into a single and profoundly jarring question and the answer is “CORNDOGS”. It doesn’t have to make sense: one human’s life intersecting meaningfully with another’s is the most hilariously perfect non-sequitur delivered by a benevolent universe. You just have to laugh and enjoy it.

And so it was with Mel and me.

At first, we both rationed our words. But then, we started to notice something.

There were dreams inside the words. Dreams that included worlds I didn’t know existed. A lodge with blue and green stained glass. A library. A crystal lake shimmering with sunlight. A bright white granite peak. A brilliant, illuminating fire.

One day, the words slowed to a trickle. Silence threatened.

But I knew there were only two choices: to suffocate underneath the silence, or to open my gift and release it before it consumed me.

Slowly, I opened my hands.

“No!” shouted Mel in terror—fearful that again they would be lost and alone.

But it was too late. The brightness of the fire was brilliant and shocking; the pain even more so. I didn’t want to let go. But I did. I released my only gift.

And it brought me here. It brought Mel here.

The thought was too much.

I looked at Taylor and saw panic in their eyes.

“We should go back and tell Rosin,” Taylor said somberly.

Unmoving, I stared ahead in shock. The beautiful pond and plain and trees and brook—all formed from Mel giving everything to the needwell.

“At least this land’s been healed by Mel’s sacrifice,” I said half-heartedly, painfully searching for a silver lining or some kind of meaning in the agony of losing a friend.

“C’mon,” urged Taylor, “This is seriously bad stuff. I really think we need to tell Rosin. And what about Dex and the rest of the camp? Michael said they all had that same line written in their tents: ‘THE WORLD NEEDS YOU.’ What if they’re off trying to do the same thing?”

“We’ve got to go—we need to tell everyone what happened to Mel,” Taylor urged.

I gave myself a solid shake, breathed deeply, and looked at Taylor.

As we turned to make our way up the hill, a strange sight caught my eye in the broader valley. Something’s off. At the far edge, I saw a whole strip of forest decaying before my eyes. 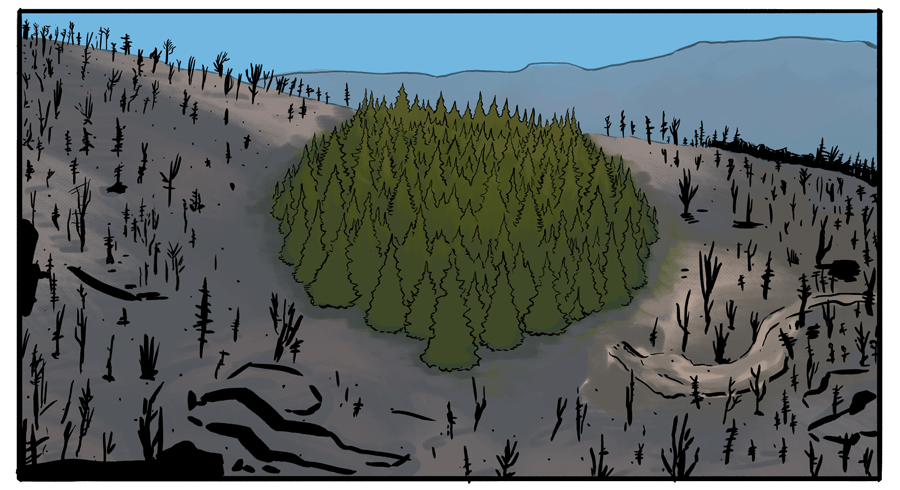 “Oh no,” I said, my glance circling the area in all directions. That was not the only spot that’s dead and rotting at at rapid pace.

“Did Mel’s life fill one needwell and create three more in the process?” Taylor said.

Running, we made our way back toward camp. A couple hours later, we found ourselves nearing the camp. I took a break to catch my breath and collect my bearings.

“Did you hear that bit of Michael and Rosin’s conversation? Something about a charred forest? I remember hearing something about lightning striking the woods near the camp a few months ago.” Taylor asked, grabbing a drink of water.

“Oh yeah. Rosin took me right through there when I first came to camp. I thiiiiink it’s… this way—yeah,” I said, turning the map in my head upside down and retracing our path into the camp in my mind. “Toward the camp, then up this trail here.”

The trail took us past the entrance to camp and farther toward the mountains to the west. It was steep in places, switchbacking in some sections and in others riding the up-and-down contour of the foothills. As the path curved past a dense patch of brush, the trail crested the top of one hill, and we heard voices. Then, we got a view of the situation.

The trail ran along the side of the hill, cutting across the slope. Far down at the bottom I saw a creekbed in the gentle valley at the foot of the hill. Probably the same one that formed the narrow canyon running through camp near the lodge. We were maybe two miles upstream from camp. From this spot, I could see most of the area burned by the fire. Looked to be about a dozen acres.

But in the middle of the massive charred section of forest was something very different: a huge and growing area that was vibrant and green.

About a hundred feet away I could see some of the group. While the rest of the burnt area made it easy to see through the forest a considerable distance, the branches and brush and green growth in that area made it harder to see. Our fellow campers appeared to be standing amongst—and physically in—the green patch of trees.

“Needwells must exist where there’s natural death and decay,” Taylor said. “We’ve got to stop this from destroying them, too.”

Taylor took off in a sprint, shouting at the group. I was in full-on panic, following a dozen feet behind.

Then I saw Rosin and stopped cold.