After much discussion and deliberation, the group chose a land to create and explore together.

I opened the third letter and began to read it aloud.

So you have chosen to create and explore Authent City. You’ll find that the characteristics of this land emerge from your deeply held beliefs.

You are about to embark on a cartographic and anthropologic expedition into this land. You will be imagining and exploring what it is like a hundred years into the future.

Your objective is to discover the possibilities contained within this land: its environment, its people and their history, the journey it takes to get there, and how it transforms you upon your return. You will be imagining and exploring the land as you go. Please document this information in your own Cartographer’s Notebook.

Fear not if different members of your party experience and see the land in very different ways—this disparity is a natural part of the creation/exploration process.

When you’re ready, walk into the fire alone together.

Everyone stared at you. “Walk into the fire?!” Dex exclaimed.

No one responded, stunned at what they were being asked to do. But I wasn’t stunned—because I saw it.

Right there, in the fire, staring back at me was my wildling. It looked at me with the same knowing, accepting eyes, and in that moment, my heart was full and confident and sure.

I took a step forward. Then another step. As I did, I saw my wildling step backward, leading me deeper, encouraging me to follow. 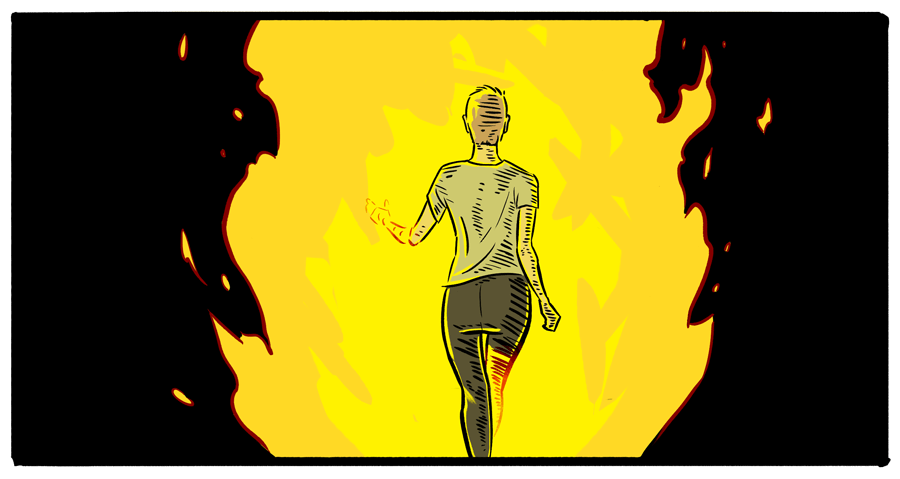 I walked right up to the spot where I couldn’t stand the heat anymore; one more step and I knew I would get burned. I took another step, one foot and part of my leg completely in the fire.

As soon as I did, a different kind of warmth enveloped me. It felt like an invitation. I no longer wanted to avoid the fire; I wanted to run right in.

“Come on! It’s safe!” I called to my companions, whose mouths hung open as they watched me stand in the fire.

“Whoa—my wildling is in the fire!” said Taylor, who stepped toward the fire, following me. I heard others say they saw their wildlings, too, and one by one, the group began to join me.

I kept walking ahead into the fire, following my wildling, filled with a deep sense of peace and rightness.

The fire formed itself into the land I had seen in my vision, except this time, I was in it. It had become not fire but a solid place that I could smell and feel and hear. The entirety of the world I had just been in was no longer present; I had been transported to a completely new place.

And new was the right way to describe it. As real as it felt to me, there was a sense of the world peacefully bursting forth before your eyes and shimmering with fresh possibility in every direction. Reality seemed to have a hazy edge to it—I was in the midst of the first strokes of a paintbrush at the center of an infinite canvas.

As I inspected the environment, I suddenly noticed my wildling was no longer ahead of me, but was standing directly beside me. This time, as I walked forward, it walked with me, following my lead.

I stopped, and looked around me at the bare but beautiful landscape. As I took another step forward, I looked off to the right, and imagined what this place could be. As soon as I did, a great sequoia tree rose up before me, in exactly the place I had been looking.

Taylor came up behind me. They were also walking forward with their wildling at their side. They looked into the distance, and as they did, a crystal lake began to form in the place where their gaze rested, starting as a puddle and quickly forming into a magnificent body of water, sun glinting off its dappled surface.

I saw Mel looking toward the vacant horizon and followed the line of their eyes. I saw a mountain range forming, but as Mel and I looked together, I saw bright white granite rise from the earth and form a gleaming craggy peak that looked like crafted white marble set against the blue sky.

Mel gasped, “I know! It’s… the most beautiful thing I’ve ever seen.”

As each person entered the fire; the same thing happened. Wherever they set their eyes, a new landmark sprouted before them.

“She was behind me but I didn’t see her come through the fire,” someone else said with a shrug. I considered going back to check on her, but then I heard enthusiastic shouting.

“Wow, are those people?” I heard someone say as they looked down into the valley forming before us. Everyone was rushing to create and explore in all directions.

“Hold on!” I called out. “We better write this stuff down!” I exclaimed. I pulled out my Cartographer’s Notebook and began to describe what I saw.