At one part of the trail, I saw a dozen yards off the path where most of the trees were blackened. It looked like a forest fire tore through the area at some point recently. As I made my way past it, the ranger slowed down and looked nervously toward the burnt area.

After another 20 minutes of hiking, a clearing opened at what seemed to be the end of the trail.

“Welcome,” Rosin said with a smile.

Up ahead, I saw a tidy little camp full of wildly different people. They were certainly not your typical band of hikers. There wasn’t a single Patagonia label among them; they looked like they’d just stepped into the wilderness after working in offices or playing drums in a band or waking up from a deep sleep. Some were talking, some were eating, and some were doing what seemed to be vigorous training exercises.

“Who are these people?” I asked.

“They’re like you. They each had their own stage and their own performance. Then one day they saw their own wildling. They were filled with wonder, and knew they had to pursue it—and they came here, too. But they’ve since learned they can’t go after their wildling alone.

“Because of the great obstacles you will need to overcome, you need to join together. In order to do that, you need to know these people, and be known by them. That’s the only way to develop the kind of approach that you’ll need to rely on if you want to thrive in the wilderness.”

Rosin catches sight of your awkward stance, shifting balance away from your injured foot.

“It hurts. But it’ll probably be fine,” I said.

“C’mon, let’s get it looked at. And, say, are you hungry?” she asked. I couldn’t nod fast enough.

I spent the afternoon eating and getting my foot taken care of. The people I met were friendly and fascinating. They were certainly not any more knowledgeable about what they’re getting into than I was. Each person had their own unique experience, but consistent across the board was that everyone described feeling fully known for the first time when looking into their wildling’s eyes. And they all felt compelled to pursue it.

As the sun began to set, I heard music coming from the far side of the camp. Was it another one of those holes? No; walking toward the sound, I noted the music was much more spare and less mournful than the world’s song.

I followed my ears to an area in the center of camp where trees had been cleared and the ground shaped to create a large rounded bowl ringed by logs and benches. There was a fire pit in the middle, but the fire hadn’t been lit yet. 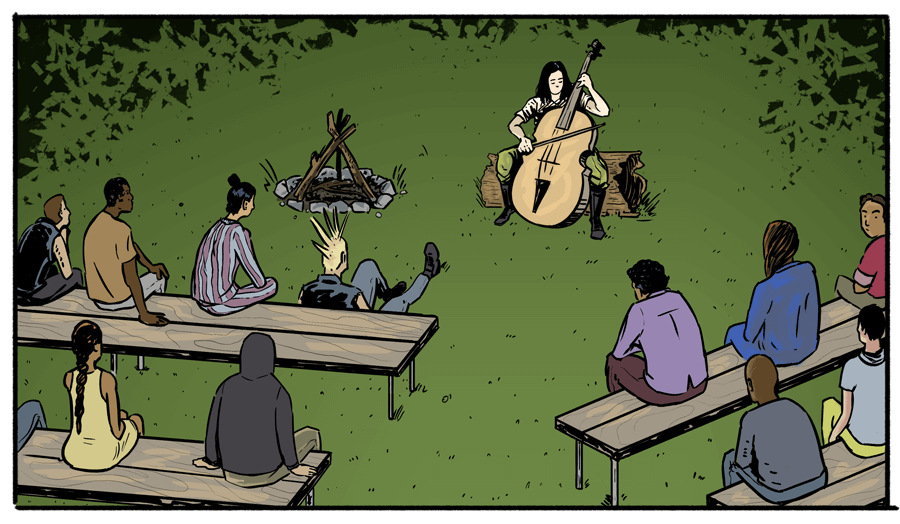 Next to the fire pit sat Rosin, perched on a log and playing—what?—a cello? Something about it felt like a memory from another world, unfolding in realtime. (Echoes of the stage, maybe?)

I wasn’t the only one who had migrated toward the sound. A few fellow campers were already on benches and logs and others were trickling in. Seemed like something was about to start, so I grabbed a seat in the back.

Rosin stopped playing, the syrup-thick tone of the cello replaced by the music of the still near-silence of the forest twilight. A quiet breeze in the tops of the trees. The sound of distant water trickled through rocks. The gritty movement of shoes turning on gravel.

After what felt like the endless silence of a lonely existence, Rosin stood and spoke.

“Most of you have just arrived, but I’ve been here a very long time,” she said.

“I have known many who have come here,” Rosin continued. “I was never a stager like you. I’ve always been here in this world. For as long as I remember, I’ve tended the wilderness and guided people like you through it.”

Someone coughed and it echoed in the long silence.

“And they aren’t just people,” she said, and her voice shook. “They’re my people. You are my people. You’re the ones who’ve dared to take the first step in opening your hands and releasing your one and only gift.”

“So many of my people have done wonderful things.” Rosin’s voice swelled with emotion. “Some have pursued their wildling at full force with open hearts. Some have turned back from the chase, afraid of themselves or what might be asked of them in the pursuit. Others have trapped and caged their wildling, dominating and abusing it.”

“Some of my people have courageously joined the cycle of constantly creating the world and exploring it at the same time, pursuing themselves and pursuing the best in each other along the way. There are others who have longed to return to the stage, to find fulfillment in being celebrated by crowds instead of doing the deeper work of pursuing the wild creature within their soul. And there are those who have followed the voice of the siren asking them to fill the countless needs of the world, without ever choosing to do the hard work of finding themselves and their truest place in this world.”

“Some have chosen to work together with others and have known the beauty of a shared pursuit. And some have insisted on going it on their own, chasing their own glory. In the process, there are things I’ve had to learn myself the hard way—I can’t make someone else’s decisions for them.”

“The legacy of my people is a world of creation. The best of what has been made has been created from a place of wholeness, peace, and truth—and it’s been created in community that recognizes the value of each individual while also seeing that just as we each have strengths to contribute, we also have weaknesses that serve us by needing each other.”

“I know you look at me and see a ranger. And, sure, I’m kind of a ranger,” Rosin said and laughed. “But you see me this evening, embracing a cello and you know who I am a little deeper: In the deepest part of my soul, I am a musician. I am a musician.”

She said this last line with a level of passion and pride that brought a tear to my eye.

“Solo performances are a beautiful thing, but the greatest music is created from a mixed chorus of a blend of voices and instruments.”

“Just like each of you, I have a simple, sole instrument through which to make my contribution to this world,” she said. “It plays but one note at a time. Tonight, I want to play for you in the same mode that each of you enter into this world: alone, solitary.”

She stopped and panned the crowd, looking each person in the face.

“But here’s the thing: you’re the only one who can choose it for yourself.”

The entire gathered group was still, moved by the performance they just witnessed. Rosin caught her breath—it was clear she had just poured every piece of emotion she had into this work and she was tired from it. Her head hung down.

She looked up, wiped tears from her eyes, and began to speak again.

“I want your legacy to be like those remarkable few who have come before—those who have dared to find their part and fearlessly play it with all their soul.”

A long pause passed as the gravity of the moment sank in for the gathered people.

“You should spend time getting to know each other tonight—you’re going to need each other where you’re going. I’ll see you at breakfast.”

See the lyrics to Legacy if you didn't catch them listening to the audio.