I did a double-take so hard my neck almost snapped. How long had this woman been walking next to me?!

My heart stopped and my brain slammed on the brakes. My body, mid-stride and a split-second behind on the news, screeched to an awkward stumbling halt. I just stood there and took in one quick shallow breath, eyes wide, staring at this woman in a wide-brimmed hat. 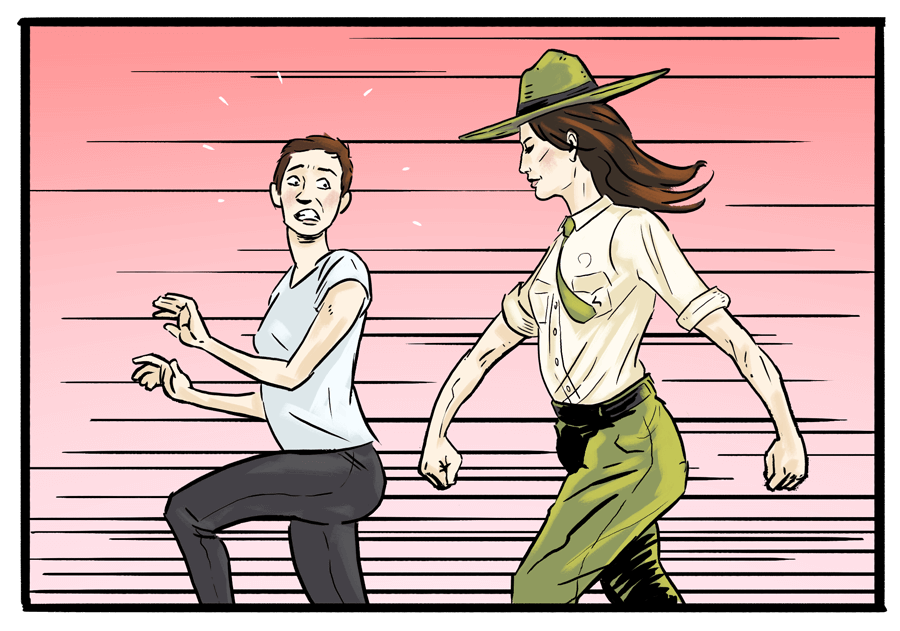 The woman looked back at me with a polite smile, eyebrows raised as if expectantly waiting for something. Oblivious to what exactly she was wanting, I looked down and around myself, patting my pockets, as if searching desperately for wherever I may have absentmindedly put the question she had just given me.

Oh, right—that was it. (Shirt pocket.)

All I had as an answer was a frenetically unpunctuated gush of word salad: “I’m uh looking for the creature from the fire that came out of me or something or what was it man I really have no idea what that thing was and some supplies and oh god my foot hurts and actually wow I’m really really hungry and there’s this trail up the—”

“A creature, eh?” She smiled. The woman, wearing a small backpack and dressed in a dark forest green uniform of some sort, was clearly entertained by my frantic energy, but there was no mistaking the twinkle in her eye—she knew something.

I relaxed a little and returned to some semblance of “normal.” We both resumed walking as I told her all about everything I’d experienced so far. The stage, the fire, the creature, this newly revealed world, the other person! (Oh, man—what happened to them?)

“Don’t worry,” she said. “You’re not the first. Not even close. And you won’t be the last.” She said this last bit and looked off into the distance.

The day had been a lot to process. I took a deep breath and wandered with my thoughts a few paces away as her attention was fixed on the eastern horizon. The woman spun her head back in my direction and shouted, “Wait! There’s a—”

My momentum kept me distractedly walking as my brain caught up to the fact that she was lunging toward me and commanding me to stop.

Whooof. I was suddenly falling and then—erk—the woman had me by the collar of my shirt, which choked me as I lurched forward.

I looked down and shivered. This was nothing I had ever seen before. My leg had disappeared below the very normal looking ground—but it felt nothing at all. My right foot felt like it was dangling in space. Quicksand? No, it was like there was nothing there at all.

A stiff breeze blew downward into the earth. My left foot was on solid ground behind you, and my body leaned in at a sharp 30º angle, with the woman holding tight to my shirt. Never so grateful to be half-strangled, I pulled my weight back as she heaved on my shirt, sending me sprawling backward on my hands. I looked down at my leg, saw it was whole, and then collapsed on my back in relief.

I caught my breath and felt my heart return to a gentle death pound. After a bit, my mouth could do no more than grind my teeth and produce a high-pitched “eeeeeeeeeeeeeeeeeeeeee.”

“What the HELL is that?” I finally said after a few more rows of “eeee.” My eyes were wide in terror.

“Watch your step. It’s really hard to know which ones are safe for you. Territory’s full of them.”

I gasped as the woman stood in the exact place where my foot disappeared.

“This one is fine for some people,” she explained, answering the question written on my face, “But you’d have been a goner for sure.”

She didn’t reply. The awkwardness of the silence filled the air for a long moment.

“So, are you like a ranger or something?” I asked her, again inspecting the uniform, and noting dozens of little patches. I caught a couple of pins—a brilliant yellow and gold lightning bolt, and another one that looked like some kind of crest or insignia.

“Something like that,” she laughed. “I suppose ’ranger’ is a good enough title for now.” Another pause, and then: “My name’s Rosin. What about you?” She reached her hand out and pulled me up. I was already in a handshake so I introduced myself and returned to asking about this thing I almost disappeared into.

“Okay, but seriously, what is that thing?” I asked again.

“Just stay on the trails,” she said, gesturing through the clearing. She began leading us both in that direction.

“But what is it? Where did it come from? How does it work? And was that music I could hear?”

“Drop it, okay?” she replied tersely.

“You’re really not going to tell me anything else?” I asked, feeling the tension rise.

Rosin’s friendliness melted into pure ice. “I said drop it,” she said.

Another long awkward silence. This time she was the first to speak.

“You were asking about the creature. Let’s stay focused on that, okay?” she said, returning to a reassuring smile. I felt the air warm a bit.

“The creature you saw,” she said, drawing me closer and lowering her voice, “the one that you say came out of the fire—was a wildling.”

“Yes. And not only that—it was your wildling. It was not the only wildling, of course. The whole world is full of them. But it was yours and yours alone. And you are right—you must follow it.”

I found myself thinking, “Man, If I were ever in some kind of mysterious adventure story full of danger and introspection and self-discovery, this woman seems like exactly the kind of guide I’d sure love to have.” Somewhere in the distance I could almost hear a far-off voice say, “You’re welcome.”

“So you’ve decided to follow the creature up and over the ridge and deep into the wilderness, have you?”

I nodded with all the confidence of a naive polar explorer sitting at home by a warm fire.

“Tell me,” she said. “Did the creature say anything to you?”

The ranger looked at me with gravity in her eyes. “Listen. Your wildling will never speak to you again until you answer that question,” she said.

She slung her pack off her shoulder, reached inside, and put a worn notebook in my hands.

“You’ve got some writing to do,” she said. “And stay on the trails!” 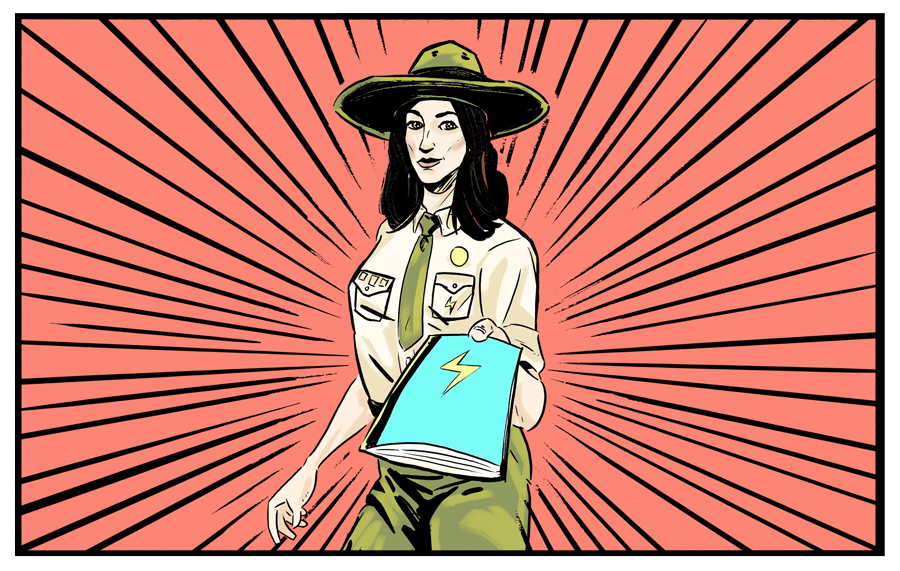 And with that, she turned on her heel and headed down the trail.