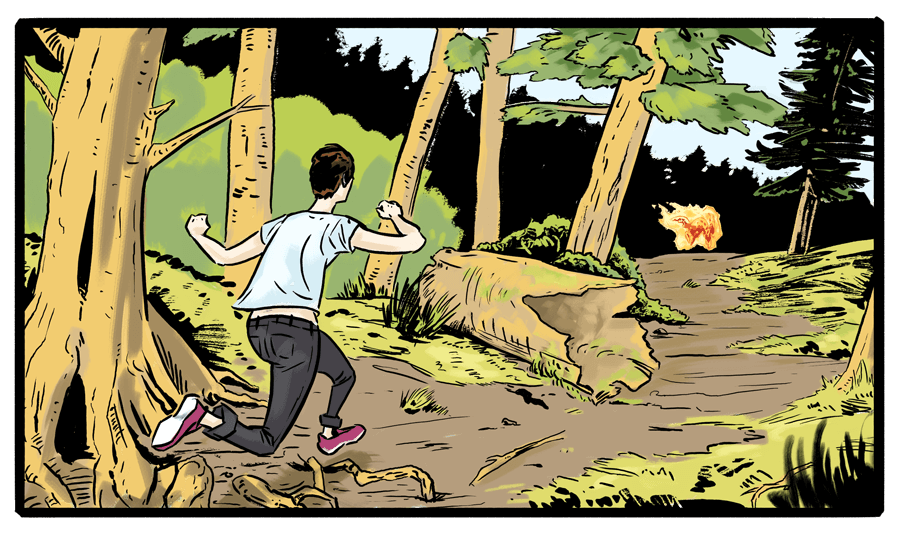 I scrambled up and over the hill, a tiny avalanche of loose rock trailing behind me.

At the top, I frantically tried to catch sight of the thing that burst from my opened hands when I released my gift into the world. All I could see for miles were trees and rivers and mountains. Breathtaking, but not what I was looking for.

What was it? An animal? No. A creature of some kind? It was definitely alive. Was it alive in my hands all that time?

Its eyes burned into my memory.

When the creature ran off, I was terrified, but I knew I had to follow it. I even had to leave my only friend and companion to do it, but it wasn’t like I had a choice. When a fire-creature comes out of you, you don’t let it run off and then casually go make a Taco Bell run. No, absolutely not—even if you’re really jonesing for a gordita! You follow that fire-creature.

This wilderness was a brand new experience for me. The stage had been comfortable: I simply waited in the wings, played my part, then retreated to the dark. It was sort of lonely and a bit meaningless, but I knew what was expected. Here? I had no idea what was happening. All I knew was I had to keep going.

As I continued walking, I couldn’t stop thinking about what had happened to my friend. Did they see what I saw? Did they release their gift? Deep in thought, I took a step, and—sploosh, ankle deep in a puddle. Great. There was less mud on the stage, too. 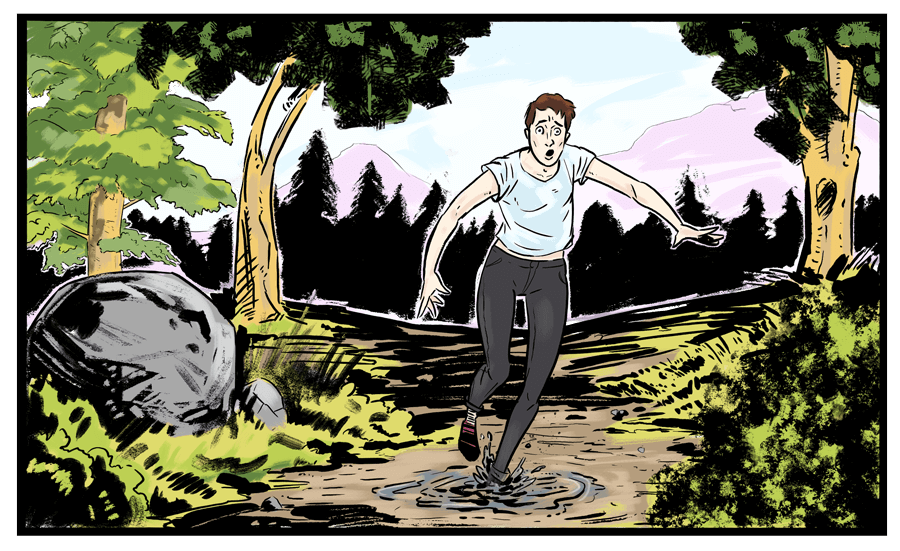 Cursing, I looked down at my shoe and let out a groanful ‘ughhhhhh.’ My shoes were clearly not wilderness thing-chasing material. I was mid-mope when motion in the near distance drew my eye.

There! I saw the fire-creature as it plunged through the clearing and into the thicket. For a moment my attention was distracted by the word thicket. (What makes something in the woods a thicket and something else a non-thickety thing?)

Seeing my mind was no use, my heart took charge and jolted my muddy feet into motion. My mind followed, flooded again with curiosity, washing away mud-footed frustration and thicket-fixation. I hurriedly clop-step-clopped into the thicket, my one mud-caked shoe awkwardly breaking the rhythm of my pace.

Then—ugh!—I tripped over my own feet (of course my inherited lack of coordination would betray me on this day) and I pitched forward, face-first and slightly to the right. I started to fall, my feet scrambling to correct themselves underneath me to avoid running into a large decaying tree. Everything went in slow motion; I realized I was going to crash. I braced myself for the impact.

Except I didn’t. Yes, I ran into the tree. But instead of hitting a solid mass of painful bark, I fell through the tree and onto the ground behind it. What the hell?

I looked back at the tree. It looked solid enough. I reached out to touch it, and my hand went right through. As I did, the dead tree slowly began to come to life, sprouting buds as greying bark turned vibrant red-brown. And I heard… music?

Where was it coming from? It sounded mournful, but strangely enticing. An image of myself in front of a crowd of cheering people passed through my mind, like a vision. I suddenly felt euphoric. Pulling my hand out of the tree, the music stopped. The vision ended. The tree withered and decayed again. The euphoria left, and I felt a slight sadness. What WAS this place?

Before I could figure out whether I believed what I had just experienced, there was the creature again, running straight ahead, directly in front of me. I considered for a moment what to do, but there was really no choice. I had to chase it.

I picked myself up, ignoring my skinned knees and palms, and flung my mud-anchored shoe off my foot. I hit a dead sprint. My one bare foot treaded gravel and needles but at this point I was anesthetized by curiosity.

This pursuit was the only thing that mattered in my life at that moment. I had to catch this creature—I had to look in its eyes again. My heart and mind and entire body were one in relentless pursuit of this mystery.

I was getting closer to the fire-creature, step by step, dodging tree branches, hurdling logs, leaping dry creekbeds, scraping knees and elbows through brush.

And suddenly the creature stopped. It turned around. And it looked right at me.

It was jarring. I practically expected I’d never catch it. And I certainly didn’t think of what to do when I did catch it. My brain and heart and body were still unified in pursuit of this mystery—but now all three were completely frozen.

And now the creature was walking toward me! All I could do was stare, mouth wide open, as it looked straight at me.

Suddenly I understood it wasn’t sizing me up like a timid and wary animal. It looked at me as if it knew me better than I had ever known myself. I looked in the eyes of this creature—I couldn’t help but look—and I instantly realized the fire-creature was absolutely not afraid of me, but I was most certainly terrified of it. How had I been chasing it all this time when every last instinct was to run away from this thing? But I couldn’t—I was committed to this mystery.

The creature slowly took step after step toward me and stopped.

Its eyes looked into me as if searching my soul and in that instant, all my terror melted away into a sense of the deepest gladness I had ever felt in my life.

And then it spoke.

“Who are you?” it asked. A long silence hung in the air.

The creature smiled broadly in response, then it was off again at a speed faster than I had ever seen anything move. Before I had finished my startled gasp, it was up and over the steep mountain ridge before me.

And it was gone.

IntroductionReflection: Who am I not?