The full moon scattered fragments of my shadow against the brush and grass framing the trail back to my tent.

I breathed in the moonlit air and let the swell of deep gratitude wash over me. My heart was so full of these people, giving me a deeply satisfied feeling of well-being and belonging.

As I reached my tent and started to open the flap, I noticed a bundle of envelopes and things tied to the tent with a leather cord.

I untied the cord and flipped through them.

Along with the envelopes was a pen and an iridescent notebook labeled “CARTOGRAPHER’S NOTES”. Hmm. Blank.

I opened the first envelope.

*Please head back to the campfire immediately. From there, you will wait for the rest of your party to arrive. Do not open the next envelope until then.

There was a list of names, including mine, Mel’s, Dex’s, and my new friend, Taylor.

I had been ready to turn in, but suddenly I was filled with a renewed sense of energy.

Was this it? Was I finally going to get to find my wildling tonight? Or was this just another exercise to prepare me for what lie ahead?

It didn’t matter. I couldn’t turn around fast enough. I made my way across camp. I was the first one to arrive at the fire ring. I noticed the fire had faded, but it was still alive.

After a few minutes of standing alone and staring into the flames, I noticed a small cluster that included Mel and Dex walking toward me, talking to each other in hushed but excited tones. Taylor followed several yards behind. Other folks I recognized (and a few I don’t) started coming from various directions. With the arrival of each person, the fire grew larger and larger.

I looked at the letter in my hand with the list. Looked like everyone was here now. The fire was blazing now, and I felt like it was a good time to open the next envelope.

This one was large, and it felt heavy as I began to open it. Inside was not only a letter, but a rectangular piece of leather. As I looked closely, I realized it was a small version of the map I had seen in the lodge—same landmarks, some detailed and some just vague shapes. Same names and locations. And there! One of the lands seemed to have grown a clump of trees! The map I held in my hand seemed just as alive as the original. Incredible.

I pulled out the letter and began to read:

You are holding in your hands a very precious object. This is lovingly referred to as The Map. There are many maps, but this is the originating force that allows us to explore and create new worlds. Take care of it, for you will need it every step of your journey.

When you stepped off the stage, you left a world of safety to enter into a world of possibility. This world, while beautiful and exciting, will not allow us to stagnate in complacency. Nature is in a continuous cycle of growth and decay; if we are not continually exploring and creating something new, the world we live in will die, swallowed by its own insatiable need.

You’ve probably noticed that this fire has some interesting qualities. For one thing, it reacts to the people surrounding it—their presence, personalities, thoughts, feelings, and desires. And when you gather together and speak into the fire the deep truths of what you believe, it will show you the shared possibility inside your collective hearts and imaginations.

But remember, what you see within the fire is not only possible. It is a vision of a future you can choose to explore and create together. You may see many possible futures, but you can only choose one for now. Choose wisely.

I looked around and watched the rest of the group reading their own letters, clutching their own maps as they did. As I waited for them to finish, I thought about what I had read. Whoa. There was so much more to this place than I could have imagined. New worlds? That I got to explore and create? But what about my wildling? I had so many questions.

“So what are we supposed to say to this fire then?” Dex asked out loud, to no one in particular.

“The deep truths of what we believe…what is that?” Mel looked confused. They walked up to the fire, and held out their hands in front of them, as if to warm them. “I believe it’s cold out here. And I’m kind of hungry,” Mel laughed.

The rest of the group moved closer to the fire, searching intently in the otherworldly flames. The fire was mesmerizing, but there was nothing to indicate any sort of warmer/less hungry future from Mel’s words.

“I had tuna casserole for dinner,” Dex said. The fire flickered back as if staring blankly.

“I want to see my wildling,” another person said. The fire didn’t change. “I believe in Santa Claus,” someone else joked. Several people laughed, but the fire stayed the same.

Deep truths. Suddenly, that phrase from the list of community values reverberated in my head. I was afraid to speak it out loud; it felt vulnerable, especially after the Santa Claus joke. But I breathed deeply and confidently said it out loud.

“Be willing to be vulnerable.” 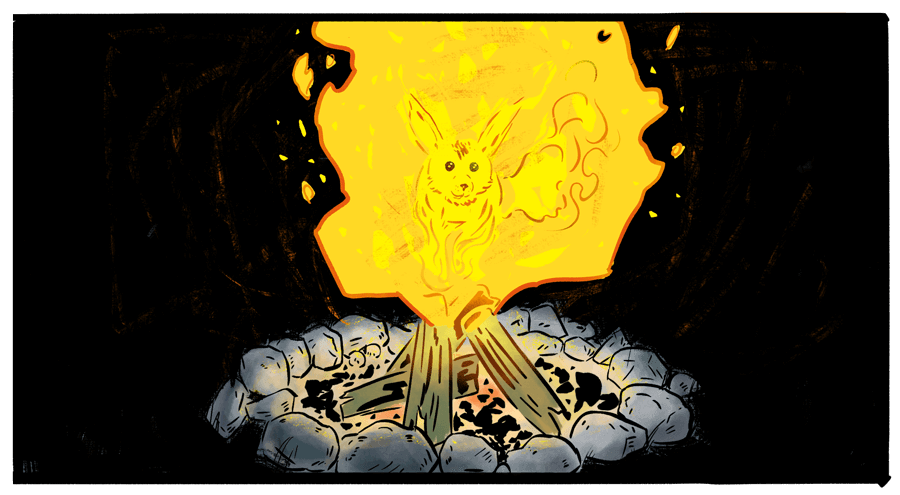 Immediately, the flames rearranged themselves to form a shape—my wildling! It looked me straight in the eyes, and that now-familiar feeling of being completely known and accepted washed over me, flooded me with a deep sense of peace. The flames surrounding my wildling started to move, and formed themselves into a landscape I had never seen before. It was a field of tall sweeping grass, undulating in the wind on rolling hills. There was nothing but this serene field as far as I could see.

“Wowwwwww,” said Mel. “Do you see what I see?” Mel described the rolling hills with the sweeping grass, but they saw their own wildling there.

“That’s exactly what I see, except I see my wildling,” Dex said. Others chimed in with similar responses.

The group stood there in solemn silence, waiting and watching for something to happen. Nothing did. The same tranquil scene remained in front of each of us.

Taylor shifted suddenly before speaking. “Be your whole self.”

The fire shifted back into a fire shape, and then re-formed in front of me. My wilding was in a different position now, alternating between looking at me and directing its gaze out over the horizon; this time a rocky terrain that also seemed endless. Nothing there except loamy, pebbly earth. But the feeling of the place was a warm and inviting one, despite the empty landscape.

Others started speaking their own deeply held beliefs into the fire—some from the community values, others completely new and deeply personal. Each time the fire re-shaped itself into a new but mostly blank landscape, like a land waiting to be created.

After doing this for a while, I remembered the last part of the letter. “We have to choose one.” Everyone looked at me in expectation.

“How are we going to do that?” asked Mel.

I turned around and had a seat on one of the logs surrounding the fire pit. “Let’s figure it out together.”